In Case T 328/17 RENV, on January 20, 2021, the Second Chamber of the General Court (GC) granted its decision on EU figurative mark BBQLOUMI. 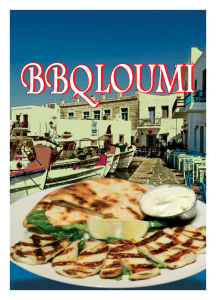 Background to the dispute

M. J. Dairies EOOD filed an application on 9 July 2014 for the registration of an EU trade mark for the sign BBQLOUMI for the following goods and services:

The Foundation for the Protection of the Traditional Cheese of Cyprus Named Halloumi (‘the Foundation’), opposed it entirely based particularly on the earlier EU collective word mark HALLOUMI, registered under number 1082965, designating goods in Class 29 for ‘cheese’. The grounds of the opposition were those set out in Article 8(1)(b) and (5) of Regulation No 207/2009 (now Article 8(1)(b) and (5) of Regulation 2017/1001). The Opposition Division of EUIPO rejected the opposition and the Foundation Appealed.

EUIPO’s Fourth Board of Appeal

The Board rejected the Appeal by stating that, notwithstanding its status as a collective mark, the opponent’s mark was weak because ‘halloumi’ designated a particular type of cheese produced in a certain way in Cyprus and having particular characteristics associated with its composition and taste, in the sense that there was longstanding use of that term as a generic name. While evaluating the case in terms of global assessment of likelihood of confusion, the Board concluded that the evidence submitted by the applicant demonstrated, at the very most, that the term ‘halloumi’ was used throughout the EU as a generic name for a specialty cheese from Cyprus, and that such evidence was insufficient to establish intensive use as a trade mark designating cheese, where that finding applied with respect to use in both Cyprus and Greece, as the applicant did not submit any evidence of the actual perception of the mark HALLOUMI, other than as a type of cheese.

The Board found no likelihood of confusion between the signs, by considering the marks phonetically and conceptually dissimilar, and visually similar to a low degree. Regarding the goods and services, the Board considered that the opposition was relevant only for the goods in Class 29, with the exception of ‘meat extracts’, and for goods in Class 30; yet not for services in Class 43 since they were different from cheese. The Board also found that the opponent did not manage to prove that the opposed mark would have taken unfair advantage of the distinctiveness or the repute of the earlier mark or that it was detrimental to it.

The Foundation brought the issue to the attention of the General Court (GC) by criticising the EUIPO:

2) for misconstruing Articles 66 to 68 of Regulation 207/209 (now artic. 74 to 76 of Regulation 2017/1001) since, by their nature, collective marks do not serve to distinguish a single commercial origin, but could, in any event, indicate geographical origin;

3) for wrongly considering the opponent’s mark generic, thus depriving it of any distinctiveness;

4) for wrongly considering that the differences between the marks were sufficient to avoid a likelihood of confusion, by finding the opponent’s collective mark’s lack of distinctiveness;

Through its unpublished judgment in 2018, the GC dismissed the action, in essence, by concluding that the EUIPO did neither err in its assessment of the characteristics and nature of EU collective marks, nor about the distinctiveness of the earlier mark in dispute.

The GC shared the EUIPO’s opinion that the average EU consumers would perceive the word ‘halloumi’ to denote a particular type of cheese produced according to certain features and had done so for a long time, but not to its belonging to anyone who marketed the product in question to a special association of producers or traders. The GC also found that, even though the opponent’s mark was a collective mark, the degree of its distinctiveness was low.

Although the word element of a mark, in principle, is more distinctive than its figurative element, in the present case, said the GC, the relevant public’s attention would be drawn to both the word element ‘bbqloumi’ and the figurative element in the mark, thus the EUIPO did not make any error in finding that those two elements dominated the overall impression in the opposed mark, plus in terms of the word element more weight had to be given to its initial part, ‘bbq’, than to its final part, ‘loumi’. Meanwhile, visual similarity between the signs was deemed weak because the element ‘loumi’ did not occupy a separate position in them.

Yet for the GC, the EUIPO had made two errors in its decision:

1) by finding the marks phonetically and conceptually different, instead of stating that they were similar to a low degree;
2) by finding no likelihood of confusion, if there was a low degree of similarity between the signs.

When the Foundation appealed the original judgment before the Court of Justice of the EU (CJEU), it alleged infringement of the EU collective marks regime, then misinterpretation of the case-law and infringement of Articles 8(1) (b) and 65(2).

The CJEU, by its judgment of 5 March 2020, set aside the original judgment and referred the case back to the GC. The Court underlined some general points as:

- For collective marks the likelihood of confusion had to be understood as being the risk that the public might believe that the goods or services covered by the earlier mark and those covered by the mark applied for all originate from members of the association, which is the proprietor of the earlier mark or, where appropriate, from undertakings economically linked to those members or to that association.

- Since there is no provision on the contrary and pursuant to Article 66(3) of the Regulation 2017/1001, the same criteria for likelihood of confusion in terms of Article 8(1) (b) are also applicable to EU collective marks.

- When an association applies for registration of an EU collective mark, which may designate a geographical origin, it is incumbent to ensure that sign has elements which enables the consumer to distinguish the goods or services of its members from those of other undertakings. Accordingly, the degree of distinctiveness of that mark is a relevant factor for the purposes of assessing likelihood of confusion.

So, the CJEU referred the case back to the GC by indicating that the GC should have made a global assessment to see whether the low degree of similarity of the marks at issue was offset by the higher degree of similarity, or even identity, of the goods covered by those marks, according to criteria established by the case-law relating to article 8(1)(b) of the Regulation.

The GC first ruled that since the CJEU did not declare its assessments unfounded about the characteristics and scope of EU collective marks and the distinctiveness of the earlier mark, it would only focus on likelihood of confusion in terms of article 8(1) (b) of the Regulation and the case-law relating to it.

The GC determined the relevant territory as the European Union and the relevant public as being the general public whose level of attention is average when purchasing the goods in question. As regards the comparison of the goods and services, it stuck to its view in its original judgment, namely finding the goods in the opposed mark identical in part and similar in part to some degree with cheese in the Foundation’s earlier mark, but not finding any similarity to services in Class 43 or to ‘meat extracts’ in Class 29.

The Foundation particularly criticised the EUIPO for not having taken into consideration the figurative element (depicting grilled cheese on a barbecue) in the opposed mark and thus making an assessment that there was no conceptual similarity between the marks. According to the Foundation, consumers, particularly in the UK, associated halloumi cheese with cooking on a barbecue. That finding, supported by the Mediterranean context to which the graphic representation composing the mark applied for refers, should lead to a finding of similarity between the signs and, therefore, of a likelihood of confusion having regard to the identity or similarity of the goods and services which the marks at issue designated.

Moreover, the Foundation insisted that the word ‘bbqloumi’ should be considered as a ‘portmanteau mark’, namely a mark consisting of two very easily recognisable word elements. It argued that the ‘bbq’ part in the opposed mark lacked any distinctiveness, yet the common part in both marks ‘loumi’ had a certain degree of distinctiveness. Indeed, in parts of the EU ‘bbq’ is a synonym of ‘barbecue’ whereas ‘loumi’ had no meaning other than being the abbreviation of the term ‘halloumi’, thus the marks were similar with respect to the only distinctive element available.

The GC, while making its global assessment, first focused on the common part in both words, namely the component ‘loumi’ and concluded that this part gave a low degree of visual, phonetic and conceptual similarity. It agreed that to some extent the large part of the relevant public may perceive the grilled food in the figurative element as being halloumi cheese, yet ruled that, when consumers saw the word element of the mark in dispute, their attention would be drawn more to the initial part of the word element ‘bbq’ rather than the last part ‘loumi’. The GC did not deny the fact that the figurative element in the mark supported to some extent the concept conveyed by the word element, namely that the halloumi cheese is cooked or grilled on the barbecue. Nevertheless, the GC found the figurative element more related to the concept of barbecue than to the halloumi cheese produced in a Mediterranean environment, because it was not possible to state categorically that the goods represented were pieces of halloumi cheese.

The GC also pointed out that the figurative element in the mark applied for played a differentiating role because the Foundation’s mark was a word mark without any figurative element. For the GC the ‘loumi’ element contributed very little to the distinctiveness of the mark applied for because ‘bbq’ catches the relevant public’s attention the most and because the Foundation’s mark had a weak degree of inherent distinctiveness.

By referring to case-law, the GC acknowledged that just because the earlier mark had weak distinctiveness, this per se did not automatically mean that there would not be a likelihood of confusion. Yet, the GC said, in the present case, the component that both parties’ marks share, ‘loumi’, itself had weak inherent distinctiveness and this impacted negatively on the global assessment for similarity in terms of likelihood of confusion. The GC focused its analysis on the weak degree of inherent distinctiveness of the opponent’s mark because it shared the EUIPO’s assessment that the evidence submitted by the Foundation did not allow a finding that consumers, confronted with the earlier mark, would associate it with something other than halloumi cheese.

As to the Foundation’s argument about the message that the applied mark conveyed when the figurative element and the analysis about the word element were considered together, the GC ruled that did not differ significantly from the relevant factors relied on in the global assessment of the likelihood of confusion. So, the whole action was dismissed.


Post Scriptum: On 24 March 2021, the GC dismissed another action (T-282/19) brought by the Foundation against a Greek company producing cheese under the figurative sign ‘Halloumi Vermion’, following a similar line of thinking to the above analysed judgment. However, a few days later, on 29 March 2021, the EU Commission unanimously approved the registration of halloumi as a Cypriot Protected Designation of Origin (PDO), a new fact which is expected to bring ground-breaking modifications as to the legal protection of halloumi.